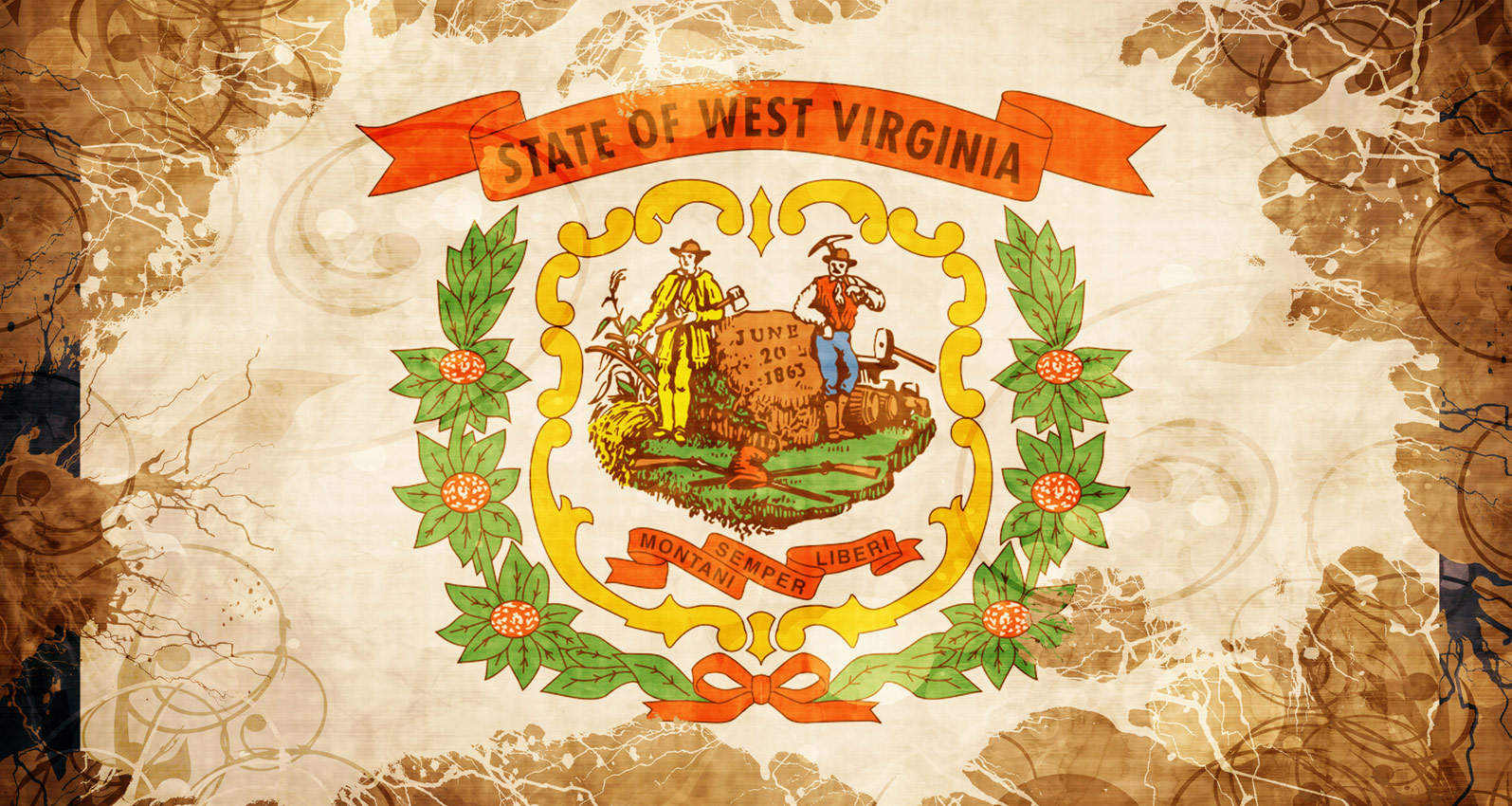 James Robinson is my direct paternal 4th GGF, and a personal brick-wall within my family tree. The genealogy of his ancestors and family origins has been a mystery for over a century.

Also, I have seen many other family trees speculating the line of James Robinson, going back to ancestors originating in Massachusetts, Vermont, Rhode Island, etc., and even some tracing this lineage back to 14th century England or Scotland….. yet no valid evidence or paper trails actually substantiating any of this…..least none that I have seen, which could not easily be dismissed as erroneous, guesswork, or poor research. Much of this nonsense derives from improper associations with the ancestors of ‘Ebenezer Robinson’, or ‘John Robinson’, Pastor of the Pilgrims.

For me, the genealogy indeed stops with my 4th GGF, James Robinson, however I would be delighted if anyone could show otherwise. I have long searched for the ancestors of James Robinson, 1760 to 1835. On this note, I have not seen anything which actually establishes his birth year, or birthplace, other than what is suggested in genealogical text, or websites such as ‘Find-A-Grave’.

All of this said, how do we advance the family genealogy, and break through the brick-wall of James Robinson? For this, we have turned to genetic genealogy, which has been somewhat enlightening.

James Robinson had 4 sons, Job, William, John, and James Robinson (Junior). Though these 4 sons are well established, I have seen many other family trees which claim other son’s, such as, ‘George Washington Robinson’ (who some indicate his parents to be ‘Joshua Robinson & Elizabeth Davis’), but again, I find no supporting evidence for this.

Also, in early colonial Harrison, Virginia, recent Y-DNA results have shown at least one other unrelated Robinson line resided in the Lumberport area of Harrison. This unrelated line is currently identified as haplogroup R-BY64614 (R-BY119261 at FTDNA), however more Y-DNA testing is needed to further define this Robinson family line. This revelation came to light in the Y-DNA testing of another Robinson autosomal-DNA cousin, who has solid genealogy to his direct paternal ancestor, Benjamin Robinson, a well-known and established citizen of early Harrison, Virginia history. 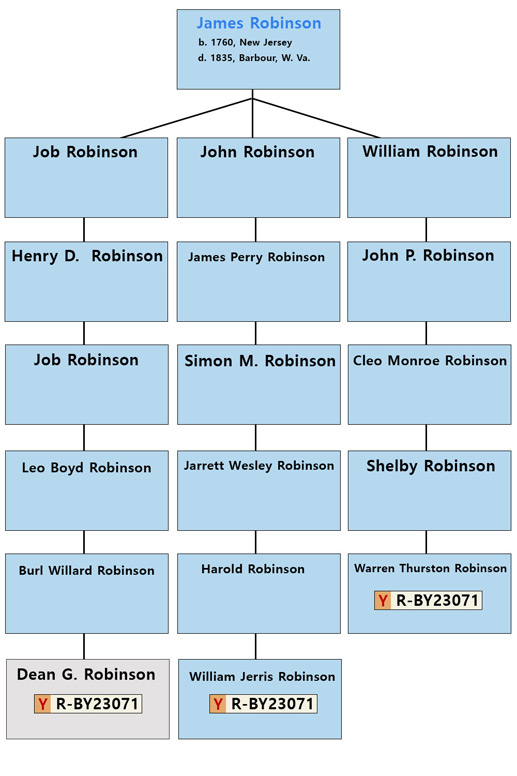 Our haplogroup, R-BY23071, is subclade to the more ancient clade, R-L1065, identified as “The Scot’s Cluster”, which overwhelmingly consist of men from Scottish ancestral origins. As Robinson’s, this surname is somewhat unique to the Scot’s Cluster, and to date, there is only one other man therein, with the Robinson surname. The following is a link to R-L1065 of ‘The Big Tree’ (a phylogenic Y-DNA SNP tree), managed by Alex Williamson:

Furthermore, the evidence also suggest our paternal Robinson line stems from a more ancient Scottish ‘Campbell’ clan. This has been established because we Robinson’s share the ‘unique and private’ Y-DNA SNP’s of these Campbell’s, those of R-BY23069, and R-BY23070…..and it is estimated the we changed our surname, from Campbell to Robinson, some 300 to 400 years ago. Also, as ‘Scot’s, it is far more likely this surname change was originally to ‘Robertson‘, rather than the English variation of ‘Robinson’….and later changed to the current surname with early immigration into the British American colonies.

The following illustrates how we position within the Big Tree mentioned above:

So, from whence in the Scottish homeland did our Campbell family hail, and which of the many historical branches of the Campbell Clan did we arise? Current genealogies within our Y-DNA cluster are suggesting the areas of Argyllshire or Perthshire, but the specific clan is yet to be determined.

However, we are currently testing another close Campbell Y-cousin, who’s well documented ancestry leads to the Campbell’s of Milntown in Glenlyon, who descend from Campbell of Duneaves. Interestingly, one of his direct ancestors was Duncan Campbell who lived in Milton Eonan, Glenlyon, Perthshire, Scotland….. and he married a Janet ROBERTSON in 1715. Some of this family were Jacobites, and given the time period and conditions, the Jacobite Rebellion could well explain need of a surname change and immigration to the New World, possibly to flee opression. STAY TUNED for future developments!

The following video presentation by Genetic Genealogist, Alasdair MacDonald, outlines our work in the paragraph above:

As our Y-DNA research continues, in time, new findings will emerge…..and as we test further, we soon hope to discover our common Campbell ancestors, proper Clan affiliation, as well as, heretofore unknown R-BY23071 Robinson lines…..and this is where things can get really exciting.

In the case of our MDKA (most distant known ancestor), James Robinson, nothing is known preceding him, but surely he had brothers, a father, uncles, a grandfather, and grand-uncles, etc. What of all the possible unknown/untested Robinson family lines, and their descending male lines? Y-DNA can lead to the discovery of these new paternal lines.

If we can tap into any of our other unknown Robinson paternal lines, suddenly the size and scope of our Robinson family tree becomes much larger, and our current family tree (only the descendants of James Robinson), becomes just a small part of a much larger tree.

Our Y-DNA testing is conducted through Family Tree DNA (FTDNA.com), which is a bit expensive, but on a positive note, pricing has come down substantially in the last couple years.

This type of DNA testing can also resolve issues or controvery, wherein claims are made of supposed ancestors. and whether or not they are truly related….such as, the aforementioned, ‘George Washington Robinson’. In these cases, by Y-DNA testing a direct male descendant of the paternal line, these controversies can quickly be resolved.

As to the descendants of our James Robinson, my most up-to-date family tree can be found at Ancestry, by searching for ‘kryptkeeper001’ in the Member Directory. As with all family trees, this is an ongoing ‘work-in-progress’, and I welcome and encourage all comments, additions, corrections, and collaboration. I would love to hear from you, and/or perhaps even add you to the family tree.

Furthermore, regarding our Robinson line, there is also the genealogical reference work of Don Norman to consider. Click the link below to download this in a ‘.DOCX’ file format:

Please feel free to contact me, and let’s embark on an adventure of new Robinson family discovery! My sincere thanks for reading…..Cheers & Regards!